Here we are in Salsomaggiore Terme, which as the name suggests is an old spa town, but is also a getaway spot for many Italians. It sits nestled in the foothills of the Appennine mountains and it is HOT here! Fortunately, most of the air-con is working and this being Italy, there is some absolutely top notch ice cream to be had - a fact not lost on the U16s in particular.

The playing venue is the local Palace of Congress and for this event, the security is tight. There are police stationed on the doors and all badges are scanned on entry. It's also tight in the playing areas. Following the recent scandals in the game, the WBF are conducting random electronic sweeps of unsuspecting players.

However, we're all here to try and play some cards and the U16s have been showing their older compatriots the way. Three wins out of three and they are off to a great start. It's been tougher for us with the bigger boys and girls. The team didn't actually play that badly at all in the first three matches (against Netherlands, Hungary and Finland) but only recorded the one win against the Finns - just one or two cards in different places would have sen the team much higher up at that point. The final match of the day against Japan was disappointing though and every error got deservedly punished. So the team is on the back foot ahead of tomorrow's three matches - but it's a tough day. Hong Kong are first before the table topping (and very strong) Swedes and finishing off with the Ashes clash against the boys from the land down under. 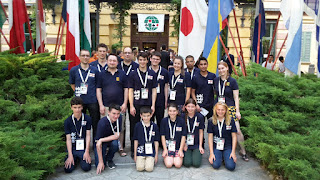 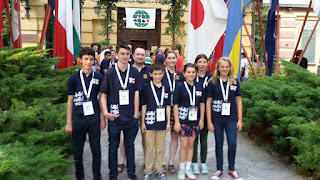 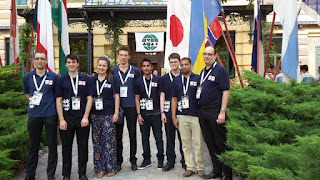