A spectator's view of events at the European Championships

I have come out to Budapest to give our teams some support over the last three days of the Championships. The weather is very hot, so being inside is definitely preferable to sweltering out of doors. I will be doing some sightseeing after the bridge is finished.

If you can forget the football for a while, the England teams need your wishes, prayers and crossed fingers for the next two nail-biting days. And you can forget the referendum too – it's done and dusted now, and our teams have to Remain in the top six places to make the World Championships in France next year. Actually, if France finish in the top six in any event, England only need to be in the top seven to qualify.)

The Open team are in eighth place, just behind Bulgaria and Italy (and seventh place will be good enough). They had an exciting board in their first match today, when they made a grand slam on a 'memory squeeze': with two tricks to go, the defender sitting under dummy held two kings, and dummy had the two queens. When declarer played his last trump, the defender threw the wrong king and the slam rolled in! I watched at the table when England played Finland in their third match of the day. I was impressed when Tony Forrester dropped the singleton king of trumps off-side. (“Fairly automatic” he told me afterwards, and I nodded knowledgeably.) I also like their sequence Pass - 2NT, 4S - 6D, where 4S was a 'two-under slam try' (in diamonds). Andrew Robson brought the slam home with aplomb although, to be strictly accurate, it was with a finesse and an overtrick.

The Women's team established themselves near the top of the table in their second match, and have been in a qualifying position ever since. Once again, seventh place will be enough. At the moment they lie second, in the leading group of three with Poland and France. They still have to play Poland, France and fourth-placed Netherlands, so a lot can still happen.

The Seniors are giving us a roller-coaster ride, moving in and of the top sixth on alternate matches. (This time it is top six that matters.) They are just ahead of Bulgaria and Turkey. I was delighted to see England beat Poland today; Poland have beaten us in the quarter -finals of the last two major events, so it was nice for them to get some revenge. The Senior team have asked me pass on their thanks – once again – to Roger O'Shea and Pharon for the support in these Championships – it's the Pharon logo that you can see on the Seniors' shirts. 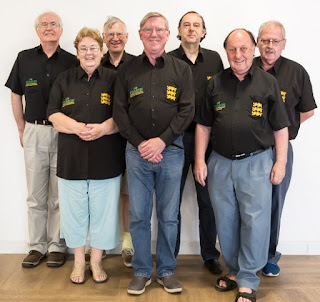 All the team have arrived and are in good form. Sandra Penfold and John Holland are the only two who have played in the Europeans before but the rest are itching to get their toe in the water.

All of us are thinking about Colin Simpson who had to withdraw from the team and is undergoing a serious operation. We all wish him the very best.
Posted by Unknown at 13:49 No comments:

All the Senior team have arrived in good spirit and are rearing to go.
However all our thoughts are with Colin Simpson who was an original member of the team and is undergoing a serious operation. We all wish him the best.
Posted by Unknown at 13:44 No comments: