So now the championships are over and we can reflect on the team’s performances. Certainly the U20s didn’t play up to their pre-tournament levels and for that we are disappointed. The Swedes deservedly won the event and are excellent ambassadors for the game. In the U25s the England side also failed to get going and for some of them, this will be their last junior action in an England shirt. Some had been members of medal winning U20 sides but had never managed to step up to deliver the same results in the older age group categories. France snuck through on the blind side to take both this title and the girls event that they dominated from start to finish. Congratulations to both of those teams.

With no England teams making the trip to Turkey for next year’s world championships the hard work begins now to make sure that Tromso, Norway in 2015 produces much more than this championship. It is important to learn from what didn’t go well. Indeed, more lessons are learned in defeat than any victory.
Posted by Alan Shillitoe at 10:33 No comments:

So both teams find themselves in a similar position. With both having not played as well as they would have hoped, they find themselves needing a massive performance step up AND a bit of a rub of the green if they are to qualify for their respective world championships. The U20s have Poland, Russia, Turkey and a bye to finish. Poland are currently top of the U20 standings, so getting the necessary big win is a tough ask. But stranger things have happened. The U25s also have Poland to play in their run in and they will also present an extremely tough match. It doesn't look good, but all the players can do now is to try. Maybe something amazing will happen...
Posted by Alan Shillitoe at 09:48 No comments:

Another very up and down day here in Wroclaw. More up for the U25s who have given themselves an outside chance of getting a qualifying spot if they can summon up a big finish. The highlight of the day was their comfortable win over title contenders Denmark, despite shipping out a 20 IMP swing on one board by playing in the wrong grand slam.

For the U20s it began with a nerve shredding win over the Israelis, but then they couldn't replicate the efforts of their elder compatriots and nose dived to a heavy loss to the Danes. They did finish the day by extracting an all-but-maximum from the bottom of the Austrians to lift themselves to within a couple of VPs of the all-important top six. A difficult day awaits though - the solid French followed by the table-topping Swedes who were in imperious form today.

For those of you who think we have an easy job as captain and coach. You know, fly off to lovely locations and sit around drinking tea and coffee and putting our feet up while letting the kids get on with the hard work - THINK AGAIN. Here is a link to a daily bulletin article written by Michael Byrne.

On page 22 he describes one of the typical kind of junior misadventures that we have to watch while peeking through our fingers, 20 times per match, 3 matches per day. Now tell me you could survive a week of this without needing a long holiday to recover. Or very strong medication. Or both!
Posted by Alan Shillitoe at 10:03 No comments:

The sun came out yesterday and so did the flies - we are right next to the Oder river. But they weren't the only things to bite us. The U20s had a tough day with three defeats, two of them with big swings out in the last few boards. Under the new VP scoring scale, these seem to be even more costly than before. Fortunately there were plenty of shock results flying around so despite dropping down the table, we are still in touch. A momentum shift is required. Israel first up today would be an excellent place to start.
Posted by Alan Shillitoe at 09:42 No comments: 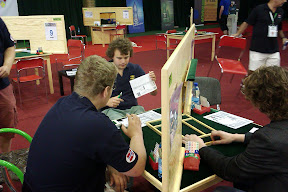 Greetings from Wroclaw, venue for the 24th Junior European Championship. The weather here has been a little cooler than the UK, but made up for by the warmth of our Polish hosts - although we are due to get some more sunshine from Wednesday onwards.

Things have started OK for the U20s and we lie 3rd after 6/18 matches. After squeaking a win against the Scots in the first match and then comfortably beating an inexperienced Irish side, we had our only defeat (so far) at the hands of our close rivals from the Netherlands. Today saw three victories - a topsy-turvy battle against the Slovaks followed by big wins against Hungary and Norway.

The nature of the competition is such that pretty much any team can turn over anyone else. There have already been a number of 'surprise' results and we expect plenty more. Consistency will be the name of the game.

Things have not gone so well for the U25s who endured a couple of rough days. Every error seemed to be magnified when the scores were being counted. However, a good day today has lifted spirits and if they can maintain that form, then they have a chance of getting back into contention. They can't afford any more slip ups from here though.
Posted by Alan Shillitoe at 09:52 No comments: