Our final day saw two exciting matches in which a lot of imps were thrown, and we ended in 13th place.

Whilst the bridge has been disappointing and we did quite badly, the team were a credit to their country, and the EBU should be very proud they have such responsible young men and women representing them.

Today we started off correcting our score against Denmark, the Danish captain agreed but as he hadn't been watching at the table he wasn't sure how many tricks had been taking.

Then we faced Russia, and although we had several pick ups in the open room they didn't seem to translate into gains in the closed room.

A loss of 15 was disappointing  but hopefully we will learn from the errors.

The team bounced back with a great win over bottom placed Scotland who got away with many technical errors and took an early lead. Once again our accurate slam bidding came to our rescue and we bid and made two good slams to turn the match around.

Tomorrow we face Norway and Finland, and two good wins will bring us up the field.
Posted by EBU at 08:46 No comments:


Michael Byrne, NPC of the Under 20s

Today was much more competitive, and we had a win and a loss.

We started against Israel, who were tough players, although they played a relatively clean game.

On an early board we had a disaster and went for 1100, and at one stage we were nearly 40 down, but we gritted our teeth and won the final few boards 20-0 to lose by only 16.

In the next match we faced Denmark. Whilst I wasn't convinced by the merits of some of their actions they all worked well and we were losing halfway through, before bidding a great slam and coming back to lose by only 3 imps.

Or did we? While reviewing the hand records I realised I had put the wrong score into the bridge-mates. I have until tomorrow before the start of match 1 to correct it, so I will go and see the directors and they will help change it, meaning we win by 2 imps.

Tomorrow we face two softer matches Russia and Scotland, and we will be aiming for two solid wins in each. Russia have has a few wins over the weaker teams, but Scotland have lost every match and will be coming bottom in the round robin.
Posted by EBU at 09:30 No comments:


Michael Byrne, NPC of the Under 20s

A change is as good as a rest and after a change in line up we are back in the driving seat.

We crushed Germany this morning and then lost very narrowly to Latvia. The bridge has improved significantly and I am hopeful, with all of the good teams out of the way that we can rise through the field.

This was a nicely bid slam hand today:

With trumps 2-2 this didn't even require the spade guess for 920.

This hand was played 16 times in the U20s and not a single pair reached 6C apart from Sam and Ben. (8 teams bid it in the U26s)

Tomorrow we face Israel who are normally a little "tricky" in several departments and then Denmark who are 7th.

Into the meat of the schedule - the procession of tough matches we knew were coming our way. Israel and home team Norway. The two worst boards of the day were unerringly similar. A grand slam in diamonds off a keycard. The one against Israel cost momentum in the match and we never really recovered losing by 17. The one against Norway took us out of the lead in the match and precipitated a slide to be behind by 20IMPs. It looked pretty ropey at that point, but a comeback was mounted, aided by another false card of a Queen - there seems to be a theme going on here too - and we came back to win by 15. Approximately all square on the day then.

The hardest part is the watching. I'm normally in the VG theatre. They're all big boys now and have been here before. They have their way of handling themselves at the table and can look after themselves. When I'm watching the scores come in, I'm still living every deal, but I can't influence it any more. If you see a game swing go out, it's difficult and you want to rage, but usually there's some quite rational reason and the Bridge gods simply weren't smiling on you. Jon has found the watching harder than me - this is his first major championship as a coach. Both of us would rather be playing as any player worth their salt wants to take their destiny into their own hands. But we can't do that. Instead we are left to agonise from afar outside the arena. All we can do is make sure they are in the best prepared manner to face the battles facing them.

We started poorly against the very inexperienced Scots team - they had a five-bid auction to a cold 6♦ slam, while our pair followed a complicated route which stopped short.  The Scots continued to play simple but effective bridge, losing only an overtrick here and there, so it was halfway through the match before we took the lead.  After that we were able to build a lead, but we missed two more slams and won by a slightly disappointing 25 IMPs.  Still, it was a morning win: it turns out the key is to select not the right  line-up but the right opponents.

In the afternoon we played the very young Norwegians.  They're a team to watch for the future, but in the present our guys knew what to do more often than they did, and we accumulated IMPs steadily.  This time Oscar and Harry had a simple auction to an excellent 6♦ contract - they were the only U15 pair to bid it.  We won the match by 38 IMPs.

Our final position in the top six would depend on how the leading teams had fared against each other.  As it happened, the VPs shared out less well than they might have from our point of view, and we finished fourth, 4VPs behind the teams in second and third.

It's disappointing  to miss out on the medals, but fourth is an excellent result for our recently formed team.  Thanks to coach David Bakhshi, especially for his meticulous briefings on opponents' systems, and congratulations to Sarah O'Connor who assembled and trained the team, and to all six players - Daniel Winter, Jack Ronayne, Liam Sanderson, Isaac Channon, Oscar Selby and Harry Madden.
Posted by Unknown at 01:03 No comments:

Today we played one match against the Czech Republic and whilst we gained several imps in the plus column we gave out far too many in the minus column and lost heavily.

Tomorrow we face Germany and Latvia and we are trying new partnership combinations to shake the team up and give them some momentum.

We shall see how our new strategy goes.


A quiet day today - just the one match against the Welsh which, after a few sweaty moments, we pulled away to take a near maximum. We lie 16 or so clear of second with Israel and second placed Norway to play tomorrow. It's about to get real. The schedule though has meant that apart from Poland vs Germany, none of the current top six have played each other yet. The final half of the event is going to be a ding-dong slug fest. So starting from the position of power feels like the place to be.

One of the joys of the game is how it can bring the generations together. It is something that seems sadly undervalued in this day and age. So tonight after dinner, a few of us were just hanging around in the lobby area chatting with Swedish legend PO Sundelin who is present at the championships as a technical adviser. There were a few games of backgammon (see twitter - #EBUTromso - for the photos) and then PO played a few hands with Isaac Barden against his dad (U15 NPC) and Jon Cooke (U25 Coach). Jon related a story of how PO was in some some way influential in him taking up the game in the first place. When he was a child of about Isaac's age, he saw the BBC TV program 'International Bridge Club' (http://genome.ch.bbc.co.uk/3b65862af3bf46cc904264e25d04b265) with PO, Zia (now a friend of Jon's), Sami Kehela and England's own Tony Forrester playing on the Canberra as it (coincidentally) was cruising up the Norwegian coast. Jon was inspired by the program to learn the game and is here in the picture playing against one of those very people. Will this meeting with PO have inspired another young English player? 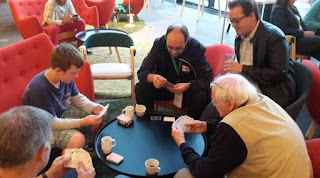