Paul Barden, NPC of the Under 15s

We've been in Tromso for one day already, in which time we've settled into the hotel, sorted out glitches with the room assignments (the hotel has too many double rooms and not enough twins), registered the teams (dates of birth have to be checked), had a short practice match at the playing venue (the U15s played the Dutch), attended the opening ceremony (thank you to the officials for keeping their speeches short), taken team photos (some hungry juniors were reluctant to be separated from their dinners), and practised against each other in the hotel bar (soft drinks only).

The arctic summer may take longer to get used to - the next sunset will be on 27th July.  But the hotel rooms have very good curtains.

Play for all three of our teams starts at 10am tomorrow - the U15s start against Sweden.  We'll be playing three 16-board matches a day, while the U20s and U25s play 20-board matches.

This is the first time there's been an under-15 championship, and the EBU U15 squad has existed for only a few months.  Sarah O'Connor, the squad manager, has worked tirelessly with the players and their parents to get them ready to play.

The events are variously known as Juniors/U26/U25, Youngsters/U21/U20, and Kids/U16/U15.  There's also a "Girls" event, but we haven't got a team in it.  The rule is that "Kids" have to have been born in this millennium, with five-year steps for the other teams.

Team England survived the journey here, and all are raring to go. At the captains meeting various revelations were unleashed on the unsuspecting nations, amongst them that appeals committees have been scrapped and replaced by a "review procedure" whereby one person (top EBL director Eitan Levy) checks the directors rulings to see that no errors have been made. The penalty for a frivolous review is 100 Euros and a 2VP fine!  I am not convinced by the merits of this, but since I have no wish to start on a minus score I will avoid voicing my disgust.
This certainly wasn't the attitude of two of the more Mediterranean nations who spent most of the allotted time for questions complaining about the food, which as far as everyone on my team is concerned is fine. In fact Alex Roberts (a refugee from the U25 team) managed to get 4 desserts on one plate, meaning he only had to go back once for seconds.
(I always enjoy trying new dishes but I confess sprout lasagne does seem enterprising even for me)

The opening ceremony was the usual stand up sit down, clap another country, repeat to end, only this time an added wrinkle was that whilst the EBL president was giving his address there was (every so often) a pinging noise to indicate that the computer behind him was being used to log onto facebook. Since this was combined with his unbelievably cliched Inspector-Clouseu accent, by the time he got to "I now declarer the championships open" everyone was in hysterics.

By the time you read this we will be well into our 3 Sunday matches against Italy, Sweden and Poland and none of them will be easy. 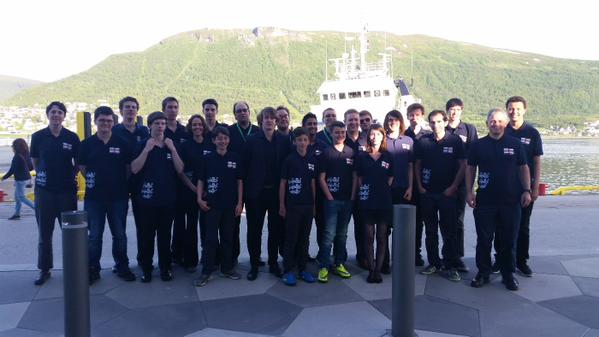