After three days of play the U16s are lying in 9th, not far from the teams ahead. They have played with consistent care and good humour and are unlucky not to have gained more vps from several of their matches. In particular, they lost swings when France bid to a grand slam on a finesse and a small slam on rather more, both of which came home to hand victory to the French side.

They have had a fantastic time at the tournament so far, eating vast quantities of (brightly coloured) ice cream, drinking obscene amounts of coke (Harry reckons he has averaged 8 cans per day), telling "hilarious" jokes ("If a chameleon is on a car, what colour is the chameleon?" "The same colour as the car!!!") and playing yet more card games. As I write this, Liz is laughing at the chameleon "joke" all over again. 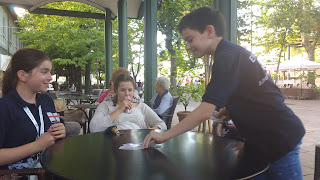 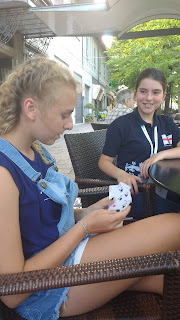 Liz's endless energy and cheerfulness have been greatly appreciated by the rest of the team and by the U26s, who have been particularly nice to her since she bought a large bag of cookies. 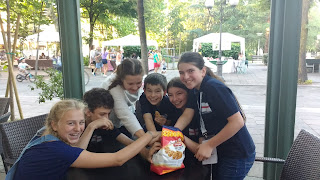